Which Acrobat is Right for you? 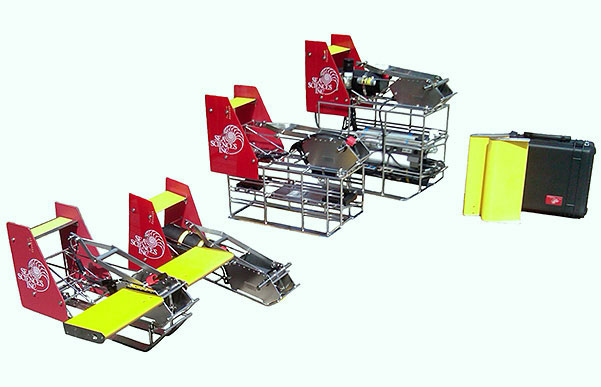 The choice of which Acrobat system to purchase initially depends on the instrumentation payload size and makeup, that the system is expected to carry and the funding available.

The Acrobat systems are modular and with some limitations, can be expanded at any time to carry larger and more complex payload suites. To that end the systems can be divided into 3 major groups with all groups customizable as needed.

The groups are: Basic, Intermediate, and Professional with increasing cost and capability from one to the next.

Basic is the least expensive. Most often the Basic system is used with short tow cables, a storage reel for the cable, and a small payload frame with skids for near shore use from a small boat. Expansion to the next payload carry level is achieved via larger payload frames, longer tow cable, and longer wings.

Intermediate includes a selection of quick-release payload frames, Ethernet communications, and power supplied to the entire system including payload.Intermediate sustems usually include an electric winch, and at least 200 meters of tow cable.
Professional has more items added to the Intermediate design such as a Roll, Pitch, Heading sensor, tow cable tension meter, avoidance sonar, altimeter on the Acrobat for near-bottom operations.

Customization can include special payload frames with Rosette samplers or other samplers, HiDef color video cameras, one or two optical fibers in the tow cable, and other needs. We suggest you contact us and we will work with you to provide a successful system. We can provide quotes with sufficient component detail to allow deletions or additions based on requirements and funding.
Share this page